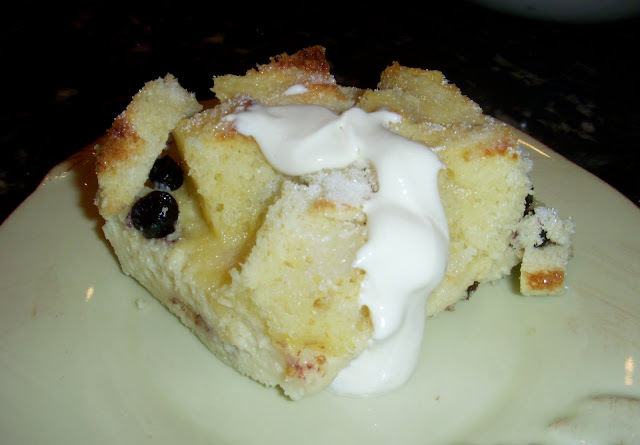 My mom and I decided to try something new and make Blueberry Brioche Bread Pudding.  It was quite tasty, and had a light, airy texture from the brioche bread.  You can serve it warm, with the cold bourbon sauce on top, but I like eating bread pudding cold; after it has soaked in all the flavors from the custard.  I still top it with the sour cream sauce.  This recipe comes from Helen Thompson’s book, “Dallas Classic Desserts“.  This bread pudding recipe is a favorite at Social, a swanky casual/elegant restaurant at the luxurious Hotel Lumen, a Dallas Boutique Hotel.

Soak dried blueberries in hot water until softened, but not mushy.  Drain. 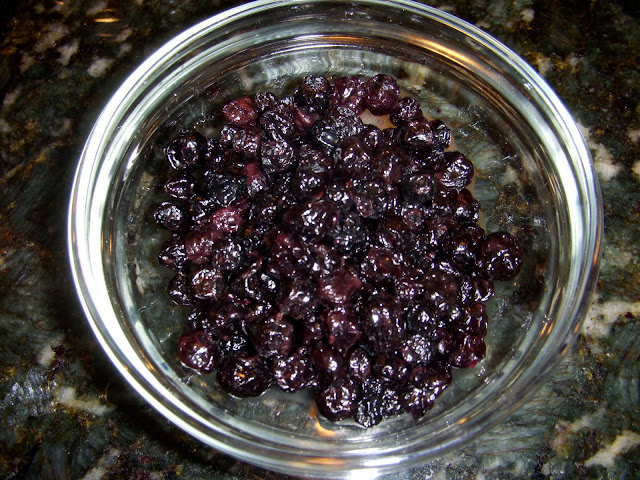 Whisk together the half-and-half, 9 tbsp sugar, eggs, and vanilla. 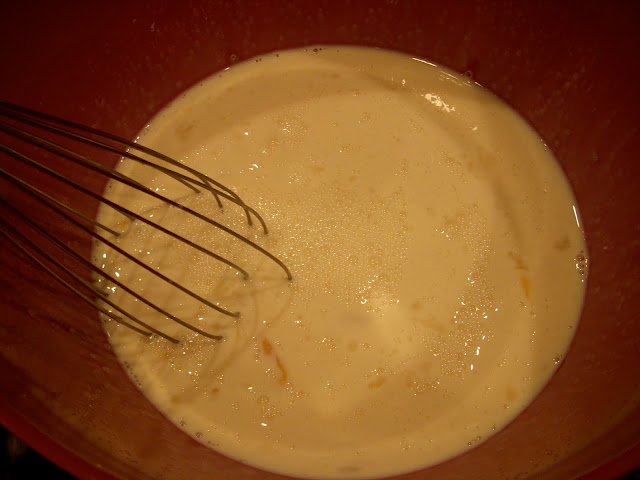 Brush 9 x 13 inch pan with melted butter.  Line the bottom of the pan with a layer of sliced brioche. 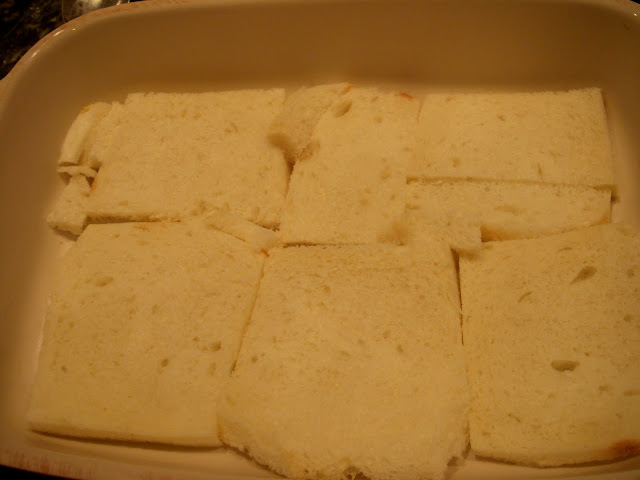 Sprinkle with one-third of the blueberries and custard. 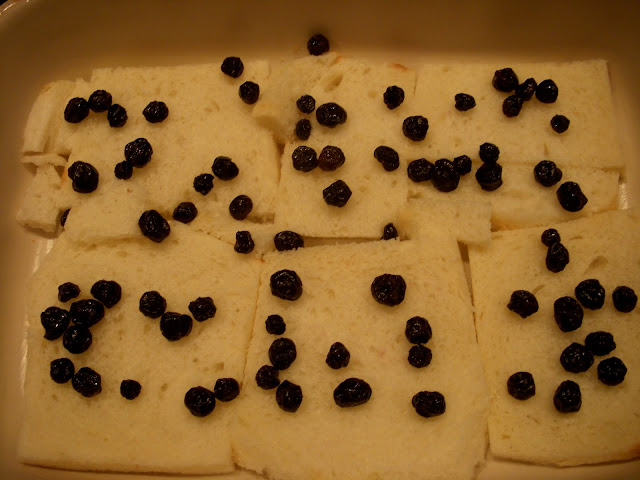 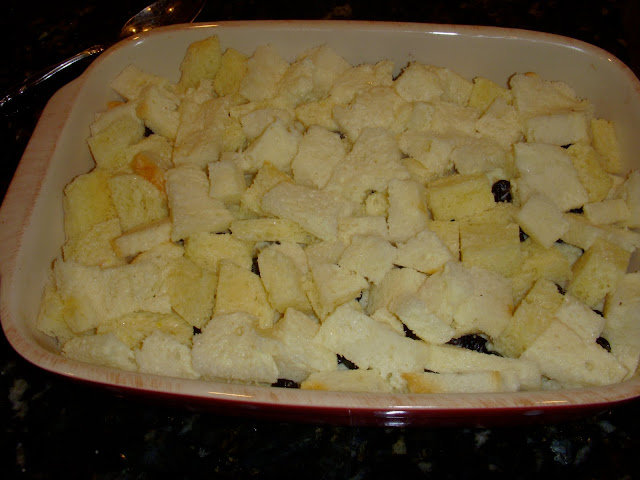 Bake at 325 degrees for 40 minutes, covered in foil, in a water bath.  Remove foil and sprinkle remaining sugar on top.  Bake for 10 minutes longer. 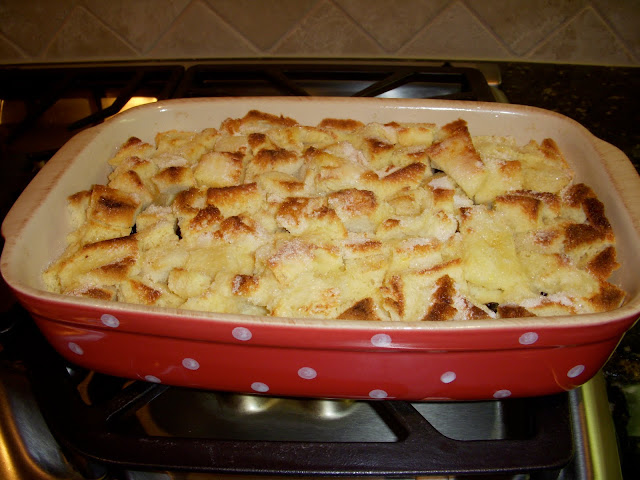 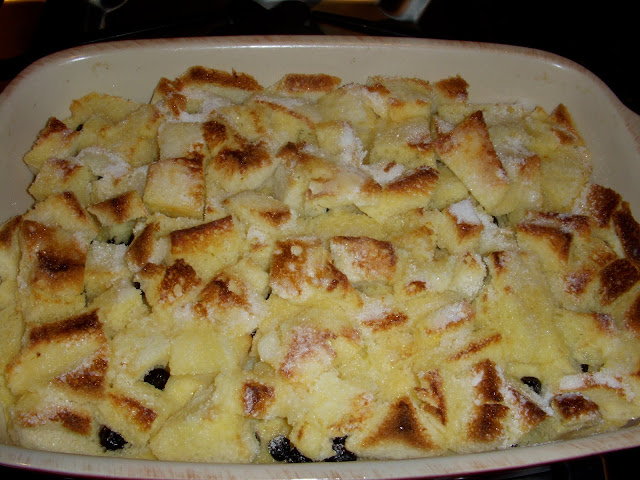 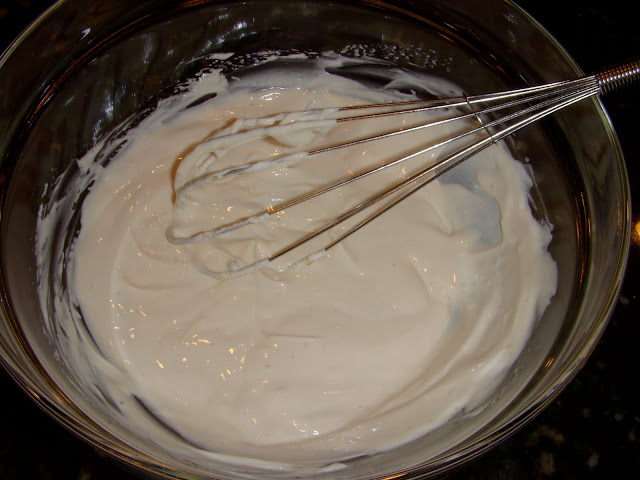 To serve, slice into 3-inch squares and top with a dollop of bourbon sauce.  Add fresh berries, if desired.

Directions
1.  Preheat oven to 325 degrees.  Brush 1 tablespoon of melted butter on the bottom and along the sides of a 9 x 13 inch baking dish.
2.  To prepare the bread pudding, trim the crust from the brioche.  Set aside.  Soak the dried blueberries in hot water to cover until softened, but not mushy.  Drain and set aside.
3.  Whisk together the half-and-half, 9 tablespoons of sugar, the eggs, and vanilla in a medium bowl until smooth.  Line the bottom of the prepared baking dish with a layer of sliced brioche.  Sprinkle one-third of the blueberries on the bread.  Top with one-third of the custard mix.  Repeat this process three times, ending with a top layer of bread.  Press down lightly to soak the top layer and cover with any remaining custard mix.
4.  Cover tightly with foil, but do not allow the foil to touch the pudding.  Put the bread pudding pan into a larger pan and add warm water to the larger pan to reach two-thirds of the way up the baking pan.
5.  Bake the pudding for 40 minutes.  Carefully remove the foil and discard.  Sprinkle the top of the pudding with the remaining sugar.  Bake for 10 minutes more to melt the sugar and create a glaze.  Carefully remove the bread pudding pan from the water bath and allow to cool in the pan.
6.  To prepare the sauce, whisk together the sour cream, brown sugar, 1 tablespoon bourbon, and vanilla until the brown sugar dissolves.  Add more bourbon to taste, if desired.
7.  To serve, slice the bread pudding into 3-inch squares and serve warm with fresh berries and a dollop of the bourbon sauce.  If you wish, you can decorate the plate with strawberry sauce.