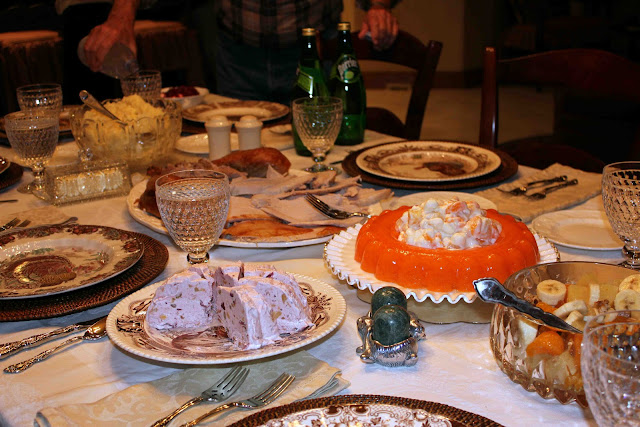 I hope everyone enjoyed their Thanksgiving as much as I did! My family and I enjoyed a wonderful feast with all of our favorite dishes.  I thought this year was one of the best-tasting Thanksgiving meals!
Now that I’m married, my husband (Matt), and I rotate who we spend Thanksgiving with each year. This year, we were supposed to eat with his side of the family. Matt’s family tradition is to get together with all of his Dad’s side, including cousins, aunts, uncles, grandparents, siblings, and in-laws. Over 20 people show up every year. The host makes the turkey and dressing, while all of us bring the sides. I had originally planned on bringing Triple-Orange Ambrosial Salad and Summer Bounty Corn Casserole, until we had a change of plans due to….FOOTBALL! 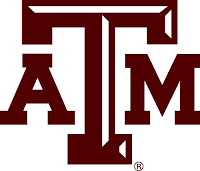 My husband Matt, played football for Texas A&M in 2001 and 2002. As most of you know, A&M is leaving the Big 12 and joining the SEC next year.  That means, this year (2011) is the last year that A&M will play the University of Texas or T.U. (haha.)  Matt got a phone call Tuesday asking if he’d like to attend the last matchup between these two rivals, and of course, he said yes. Since Matt and his friends would be at the game, I decided to eat Thanksgiving with my side of the family. 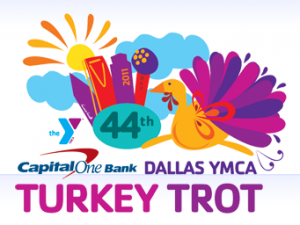 However before the big meal of the day, I ran the Dallas Turkey Trot with my sister-in-law, Leah, and my uncle-in-law, Rusty that morning. We had a blast! The only bad thing about the race was trying to maneuver between 40,000 people! Since I’m injured, I only ran the 3 mile; I usually run the 8 mile, so I was in for a little shock with the amount of people in one race. In the 8 mile, I can usually distance myself from the pack and run “alone”….not this time. Good thing I was injured and was not supposed to “race” because, had I tried, I would not have gotten very far. When I tell you that I was literally weaving through people the entire 3 miles, I am not kidding! It was crazy.  It was fun though, and Leah, Rusty and I will probably continue the tradition next year.
As I said earlier, dinner was delicious and we had a great time visiting with family. The minute Matt returned from his trip to College Station, he dug into our Thanksgiving leftovers…. I can’t blame him though….since he ate Freebirds on Thanksgiving Day rather than turkey and dressing! haha.
My mom keeps a journal as to what our menu entails for each holiday (Thanksgiving and Christmas.)  She includes the main course, sides, desserts, who brought/made each dish, what we did or did not like, etc. It helps us decide for next year’s meal what to make. By now, our menu should be perfected after all this note-taking! Below is our Thanksgiving Menu for 2011.
Thanksgiving 2011 Menu
Karen’s Turkey and gravy
brushed with butter to keep moist
Karen’s Cranberry Sauce
with pineapples, oranges, pecans and mini marshmallows
Karen’s Stuffing/Dressing
excellent…my favorite part of the meal
Green Beans
with shallots
Frozen Cranberry Salad
my family’s tradition
Triple-Orange Ambrosial Salad
with orange sherbet and mandarin oranges
Parker House Rolls
best rolls ever!
Pineapple Salad/Hurry Up Fruit Salad
my sister’s favorite
Mashed Potatoes
Pumpkin Pie
recipe from Libby’s 100% Pumpkin
Paula’s Cold Banana Pudding
the only dessert my sister’s fiance likes 🙂
Paula’s 4-Layer Dessert
my Dad’s request
Here is my plate…I had another salad plate for the Triple-Orange Ambrosial Salad and my dessert! 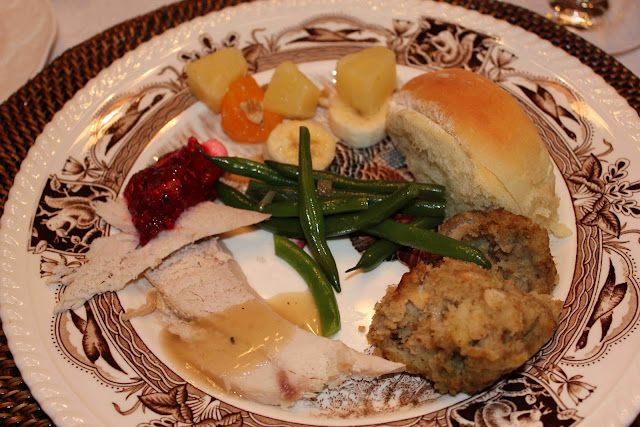 Even though I did not get to spend time with my extended family down in Houston, I did get a kick out of these Thanksgiving Turkey Cupcakes that my aunt Jolene and her 1st and 6th-grade granddaughters made for the holidays!

The cupcakes are chocolate with chocolate frosting. They used an Oreo to hold the turkey’s feathers, which were made out of candy corn. A malt ball was used for the head, and a half of a candy corn was used as the beak. So cute! 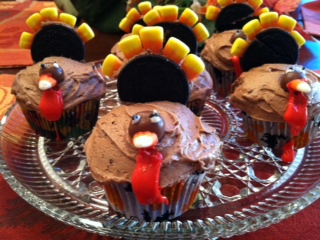