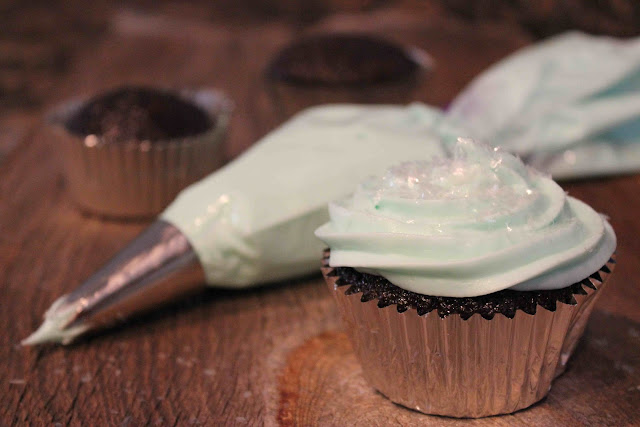 With the name “Tiffany Blue Cupcakes” you would think I was making these for an engagement shower. Instead it was a lovely baby boy shower for my friend Courtney. I was hoping the blue food coloring would yield a pretty sky blue, but instead I got Tiffany blue… nonetheless they were gorgeous!
The story behind these cupcakes is actually quite funny. In preparation for Saturday’s baby shower, I made the cake part of the cupcakes on Friday night. Check… one less thing to do on Saturday morning. The morning of the shower I thought I would make the frosting, bring it with me to the shower, and ice the cupcakes before all the guests arrived.
Anticipating that I was running late, I gathered the cupcakes, my Wilton decorating kit, my purse and a whisk and rushed out the door. What was missing on that list?  The frosting!!!
By the time I realized I left the frosting in my refrigerator, Matt had just arrived home after lifting weights, hungry and ready to eat his Jersey Mike’s sub. Lucky for me, he was home…but to his frustration, I requested that he meet me halfway to my friend’s house with the frosting I left behind.
I won’t go into details, but Matt was pretty mad…. he was hungry and just wanted to eat his sandwich and watch football. My favorite excuse of his: “Just let the guests eat the cupcakes without icing.” Really? Cupcakes without frosting…. that would not cut it. Matt then suggested that I go to Wal-Mart and buy some $.99 icing from a can. Again, not going to cut it when I went through all the trouble to make the frosting this morning. Plus frosting from a can is terrible and I have to keep my reputation!
Long story short, Matt met me with the icing, I frosted the cupcakes and everyone loved them! Matt later sent me a text saying he was sorry for complaining and also wrote “those cupcakes are the best cupcakes I have ever had!”
Guests at the party raved over the icing and how moist the cupcakes were. Even those that don’t like chocolate cupcakes LOVED these, including me! Here’s a great recipe that I’ll be sure to make again and again…

Directions
1. Line muffin tin with paper lines. Heat oven to 350 degrees F.
2. In a large mixing bowl, stir together sugar, flour, cocoa, baking powder, soda and salt. Add eggs, milk, oil and vanilla. Beat on medium speed for one minute.
3. Stir in boiling water (the batter will be thin, don’t worry, this is right).
4. Fill liners 2/3 full with batter. Bake cupcakes for approximately 18-22 minutes or until toothpick inserted in center of cupcake comes out clean or with just a few crumbs.
5. Cool completely on wire rack before frosting.

Directions
1. Place butter in a large mixing bowl and blend slightly. Add cream cheese and blend until combined, about 30 seconds.
2. Add vanilla and powdered sugar and blend on low speed until combined. Increase to medium speed and beat until it begins to get fluffy. Slowly add the milk, a little bit at a time until desired consistency is met. (Don’t add too much if you want the frosting to stay in place when piped on cupcakes).
3. Beat until fluffy, about 1 minute. Use at once or keep refrigerated. (This frosting will keep well in the refrigerator for several days, but you may need to re-beat it for the best texture.)

Yield: Enough to frost 2 dozen cupcakes if you are piping a nice swirl. (Will also frost and fill a two layer 9″ cake)
Recipe adapted from: Glorious Treats