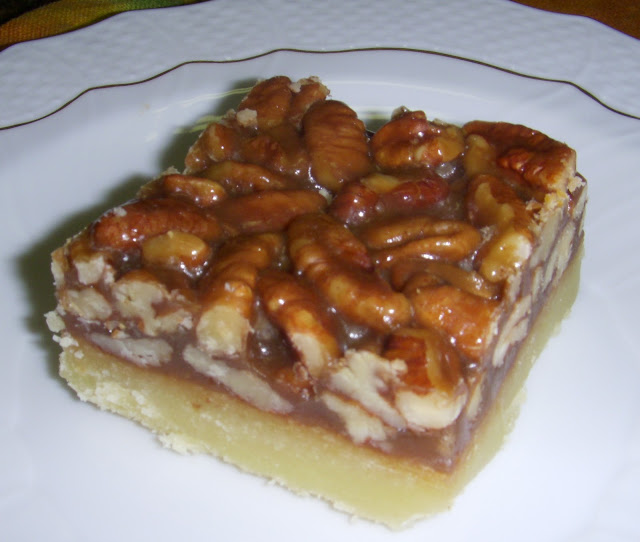 Every month, each team(s) from our elementary school hosts a “snack day”.  Ours (second and third grade) happened to be the Friday before Thanksgiving Break, so I thought it was only appropriate that I make some type of Thanksgiving dessert with apples, pumpkin, or pecans.  After much debate, I decided to try Ina Garten’s Pecan Squares, and let me tell you… they were to die for!  I went over to my mom’s house Thursday night and we thoroughly enjoyed an evening of baking!
These pecan squares are buttery, rich, flavorful, and sweet.  I’m not sure if you want to know this, but this recipe calls for 9 sticks, or 2 1/4 pounds of butter, 3 1/4 cups of sugar, and 2 pounds of pecans!! Yikes!  Like I said, these are very rich and buttery, but they are completely worth it, especially for the holiday season.  Plus, I didn’t have to eat the whole pan.  I took two boxes of bars to school and came home with only a 1/2 of box left.  I gave the leftovers to my in-laws and my husband’s grandmother said, “This was the best thing I’ve ever put in my mouth!”  Enjoy!!!
Beat the butter and granulated sugar in an electric mixer for 3 minutes.  Add eggs and vanilla; mix well.  Mix dry ingredients (flour, baking powder, and salt) into batter with mixer on low speed until just combined. 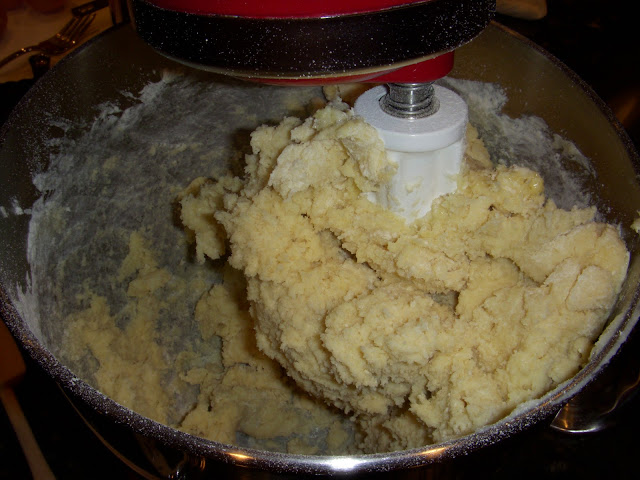 Press dough evenly into ungreased 18 x 12 x 1-inch baking sheet, making an edge around the outside. 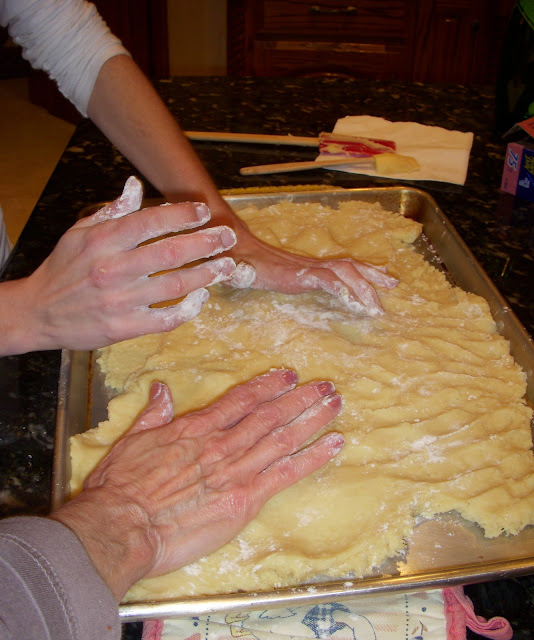 Bake for 15 minutes at 350 degrees, or until crust is set, but not browned.  Allow to cool. 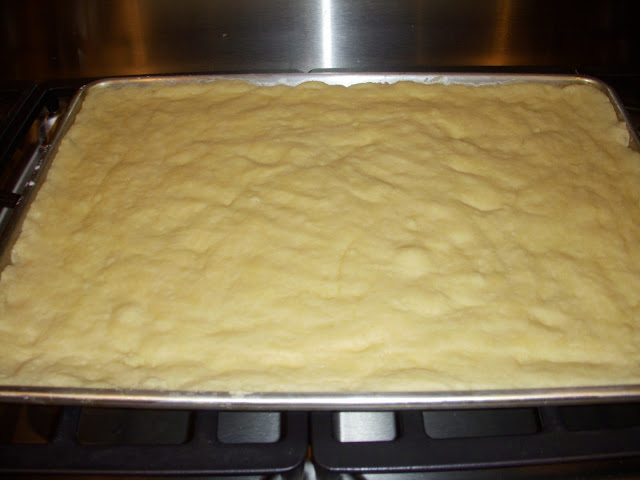 Melt butter, honey, brown sugar, and zests on low in a heavy-bottomed saucepan. 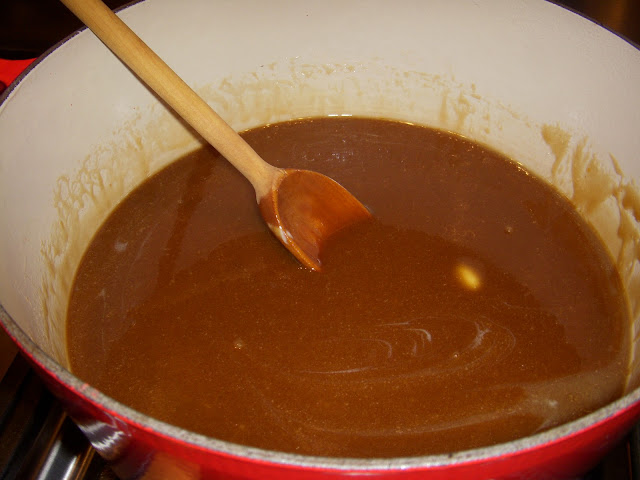 Raise heat and boil for 3 minutes. 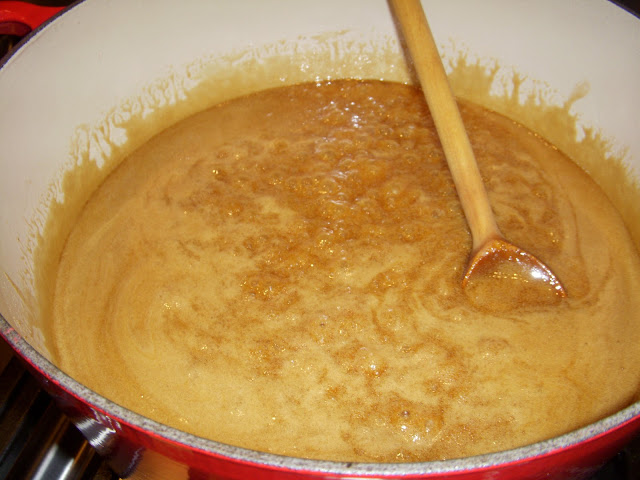 Remove from heat and stir in heavy cream and pecans. 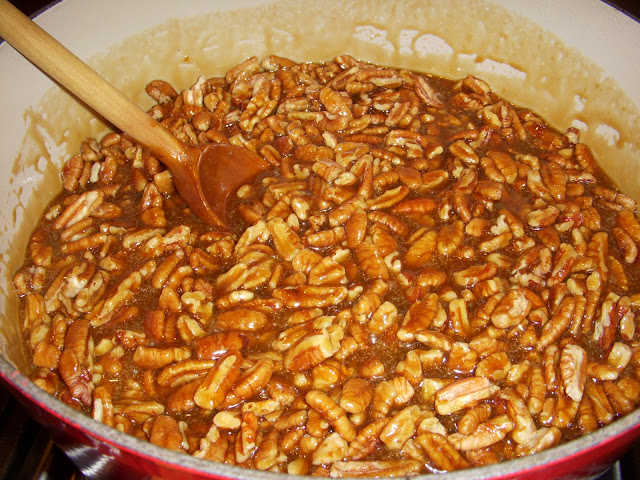 Pour onto crust.  Bake for 25-30 minutes at 350 degrees, until the filling is set.  Remove from oven and allow to cool. 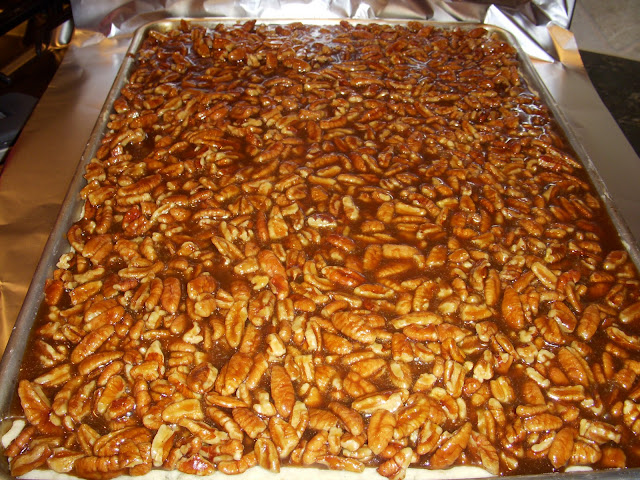 Wrap in plastic wrap and refrigerate until cold. 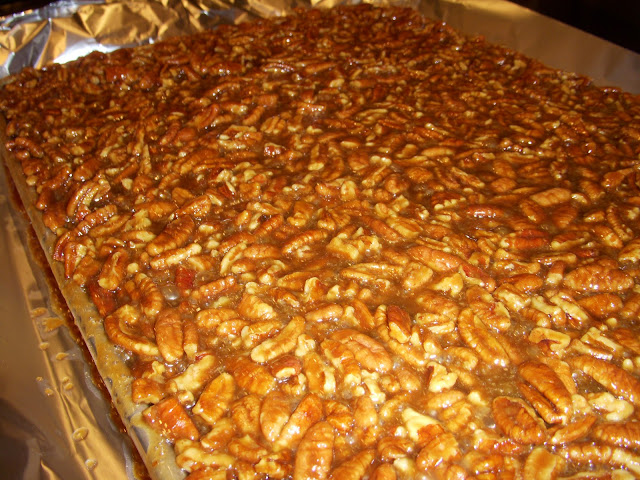 Cut into bars and serve. 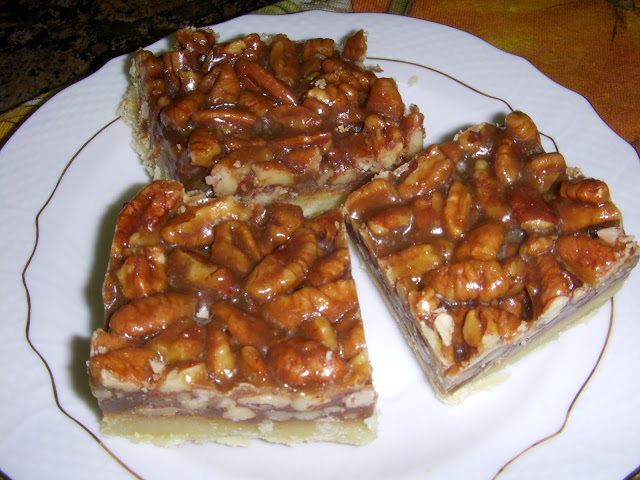 Directions
1.  Preheat the oven to 350 degrees F.
2.  For the crust, beat the butter and granulated sugar in the bowl of an electric mixer fitted with a paddle attachment, until light, approximately 3 minutes.  Add the eggs and the vanilla and mix well.
3.  Sift together the flour, baking powder, and salt.  Mix the dry ingredients into the batter with the mixer on low speed until just combined.
4.  Press the dough evenly into an ungreased 18 x 12 x 1-inch baking sheet, making an edge around the outside.  It will be very sticky; sprinkle the dough and your hands lightly with flour.  Bake for 15 minutes, until the crust is set but not browned.  Allow to cool.
5.  For the topping, combine the butter, honey, brown sugar, and zests in a large, heavy-bottomed saucepan (we used a Le Creuset Dutch Oven).  Cook over low heat until the butter is melted, using a wooden spoon to stir.  Raise the heat and boil for 3 minutes.  Remove from heat.  Stir in the heavy cream and pecans.
6.  Pour over the crust, trying no to get the filling between the crust and the pan.  Bake for 25 to 20 minutes, until the filling is set.  Remove from the oven and allow to cool.  Wrap in plastic wrap and refrigerate until cold.  Cut into bars and serve.