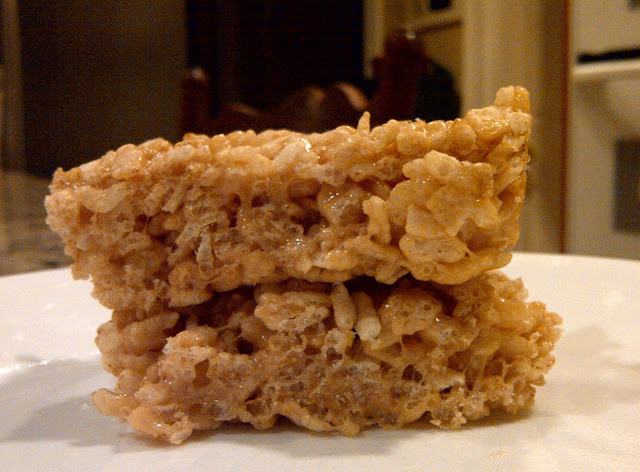 If you’re an Aggie, you bleed maroon, especially my husband Matt! He is a die-hard Aggie, and when it comes to A&M football, you better not cross him!

Last Saturday the Aggies played Louisiana Tech. At the half, you would have thought we had the game in the bag, and so did the players…. we were up by 27 or 28 points! Well, that wasn’t the case. LA Tech must have had a great pep talk in the locker room because they came back strong. While they were never ahead, they came close, and you should have seen Matt! He was so nervous he could have given himself a heart attack. Matt played football for Texas A&M back in the early 2000s. He was the cornerback and was FAST!  4.27 second 40m fast. I guess you can see that he’s pretty invested in Aggie football.

Me on the other hand, I get bored pretty easy. My mother-in-law, Paula is kind of like me, so we decided to cook up something sweet: Chocolate Oatmeal “Dawg” Cookies and these Peanut Butter Rice Krispies Treats. I’ve never made the homemade treats before, so I was super excited.

They are super easy and and only use four ingredients. I think it took us only 5 minute to prepare them. Paula told me a story about how a she had to make Rice Krispies Treats for all of Matt’s sixth grade class. She said the other moms would complain about getting their hands all sticky. Paula had no complaints and no messy hands because of her method of making these. Enjoy and until the next A&M football game – “Gig ‘Em Aggies!”

*FYI – I did not have my trustworthy Canon Rebel at the time, and was forced to use my ghetto Blackberry Torch phone instead. 🙂