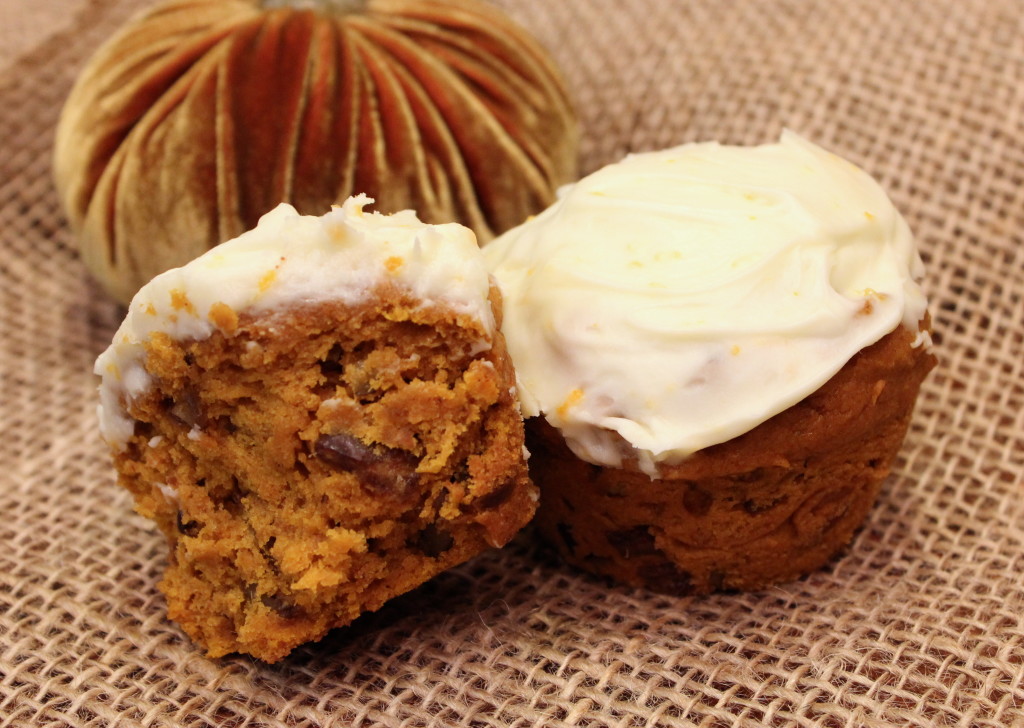 Fall is my favorite season of the year for many reasons.

Number 1: Aggie Football (okay, this may be Matt’s number 1, but I’ve gotten a whole lot more interested in football since marrying him). Yesterday we even went to College Station for the A&M vs. Auburn game. Tough loss for us Ags, but great weather and lots of fun!

Number 2: Cooler weather. Texas is known for our brutally hot summers, so when we start getting some cooler nights and mornings come October, we all get really excited.

Since my mom knows how much I like pumpkin, she decided to make these pumpkin yumkins just for me (okay, I let Matt eat some) this weekend.

The recipe is from one of our favorite cookbooks: Pastry Queen: Royally Good Recipes from the Texas Hill Country’s Rather Sweet Bakery & Cafe by Rebecca Rather. Everything in this cookbook is just like the author: down-home yet grand, and familiar yet one-of-a kind. From Texas Big Hair tarts to fried pies to cookies, I’m ready to try just about all of Rather’s recipes.

Just what is pumpkin “yumkin” you ask?

In Rather’s cookbook, she describes having found this recipe in her grandmother’s things but couldn’t ever remember making them. The unusual name caught her (and our) attention so she decided to make them. It turns out, the yumkins are a cross between a muffin and a cupcake, all dressed up with orange-flavored cream cheese frosting.

When Dad brought these over to us last night at 10:30 pm, I only intended on eating a bite but that didn’t happen…. This is probably my all-time favorite pumpkin recipe ever!!

The orange-flavor cream cheese frosting is genius and pairs perfectly with the yumkins. What may surprise you is that there are no spices in this recipe: no pumpkin spice, no allspice, no cinnamon and no cloves. However, the can of pumpkin, brown sugar, dates and cream cheese frosting create the perfect fall recipe to serve during the holidays. Enjoy!

Source: "The Pastry Queen: Royally Good Recipes from the Texas Hill Country's Rather Sweet Bakery and Cafe" by Rebecca Rather
Ingredients
Instructions
3.2.1255

One Response to "Pumpkin Yumkins"