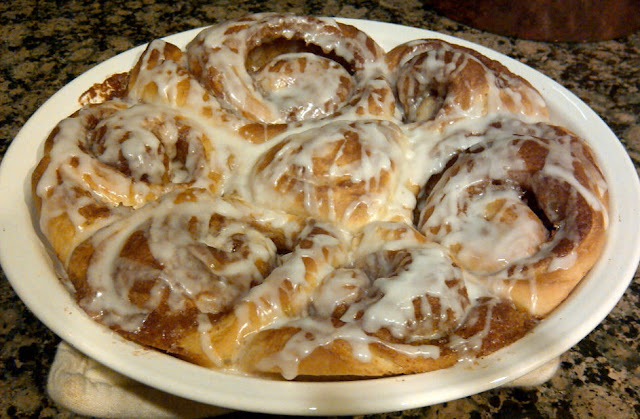 THESE ARE THE BEST CINNAMON ROLLS IN THE ENTIRE WORLD!!!  The recipe comes from Saveur.com.  I think they beat out any specialty bakery store out there!  The cream cheese part in these cinnamon rolls is not in the icing, like you may be expecting…. it’s actually kneaded into the dough!  Spreading cream cheese into the layers of dough enhances the richness and moistness of these rolls.  As you can see from the picture above, the gooey, buttery, cinnamon-sugar inside is one of the best parts of the cinnamon roll, and this recipe will not disappoint.

When you roll these out, you have two options depending on how big you want your cinnamon rolls.  With the first option, you can tightly roll the dough logs “hamburger style” where the short-side of the rectangle is being rolled.   This will yield 8 GIGANTIC cinnamon rolls (see the picture on Saveur.com).   The second option is to roll the dough log “hot dog style” or long-ways, (what we did) to create “normal-sized” cinnamon rolls, yielding about 18 rolls.

The original recipe calls for a buttermilk icing, but since we did not have any buttermilk, and because we love our icing recipe so much, we just used ours.  Our icing is your traditional cinnamon roll icing with powdered sugar, milk, and vanilla.

This dough may be prepared a day in advance and left to rise in the refrigerator overnight.   Enjoy and let me know what you think!

Combine yeast, 1/2 tsp. sugar, and 1/4 cup water heated to 115 degrees F in an electric mixer fitted with a dough hook.  Stir to combine and let sit until foamy, about 10 minutes. 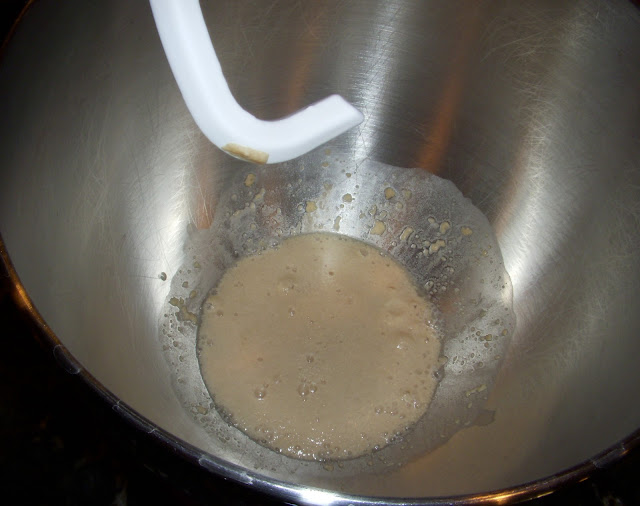 Add the remaining sugar, milk, brown sugar, vanilla, egg, and egg yolk.  Beat on low speed for about 1 minute.  Turn mixer off and add the flour and salt.  Beat on medium speed until dough just comes together.  Then knead on high speed for 4 minutes.  Add butter, then return to high speed for 6 minutes.  The dough will be smooth and pull away from the side of the bowl.  Cover and let dough rise for 1 1/2-2 hours, or until doubled in size. 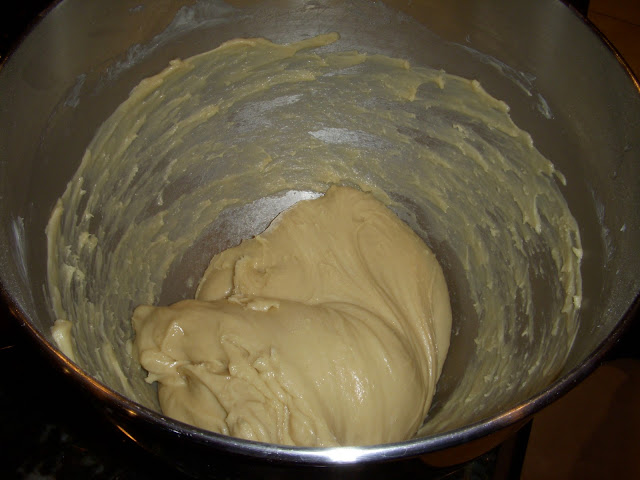 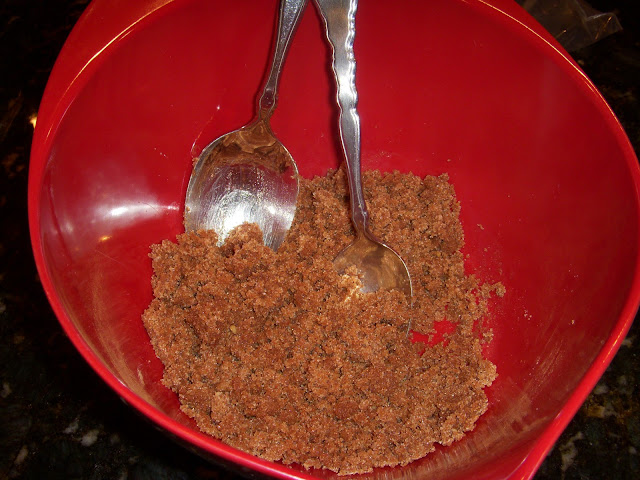 Beat cream cheese, and spread over the dough square. 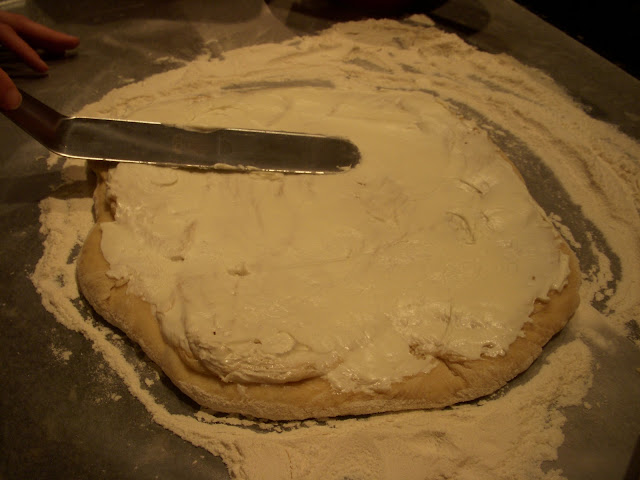 Fold the dough into thirds. 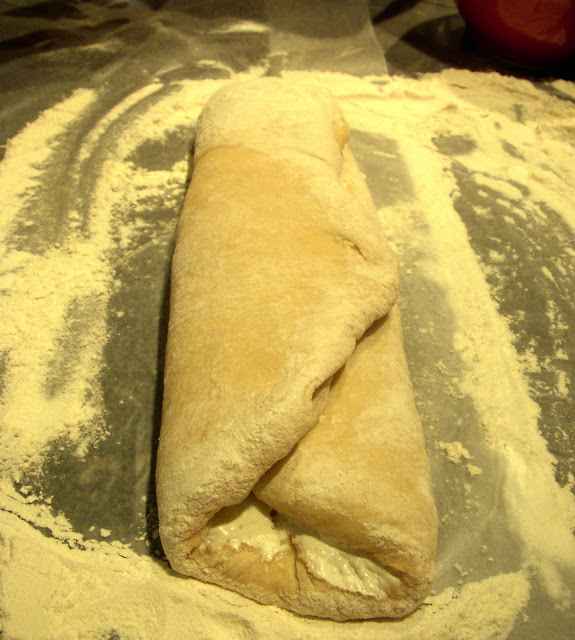 Then fold the dough into thirds again! 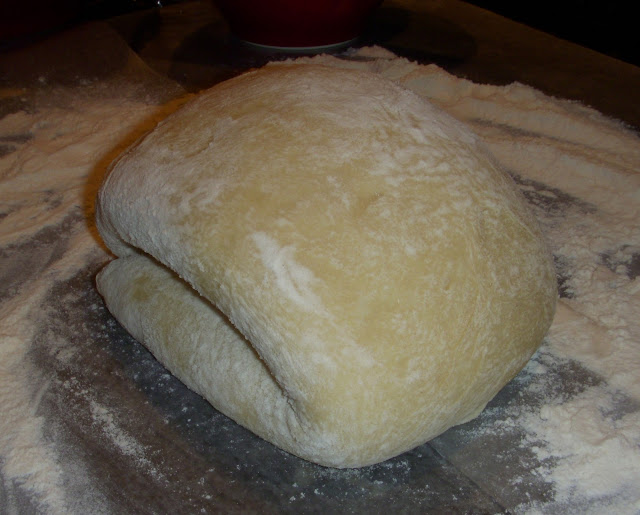 Roll dough into a 10 x 20-inch rectangle.  Brush the top with half of the butter, then top with the cinnamon mixture. 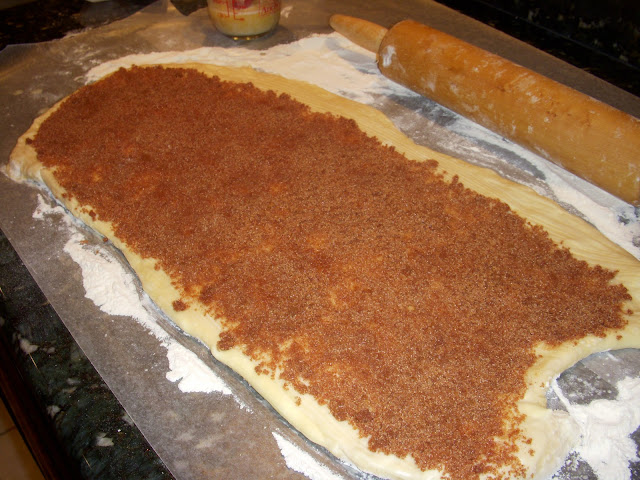 Tightly roll dough into a log.  We rolled it long-ways to make about 18 rolls.  If you want cinnamon rolls the size you would buy at a gourmet bakery, roll the dough short-ways and it will yield 8 HUGE rolls! 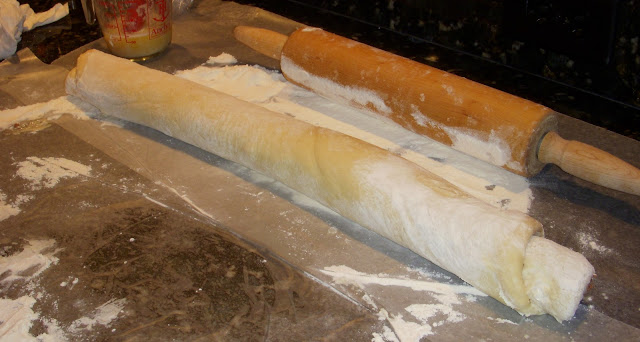 Slice rolls with a sharp knife, about 1 inch thick. 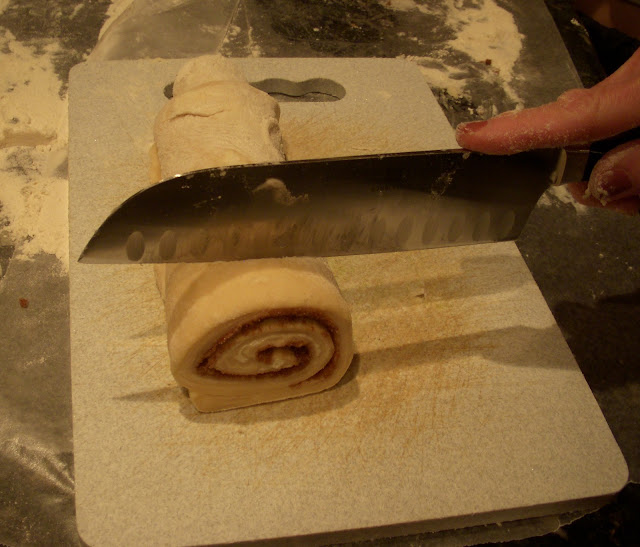 Slice and place into a buttered 9 x 13-inch pan. 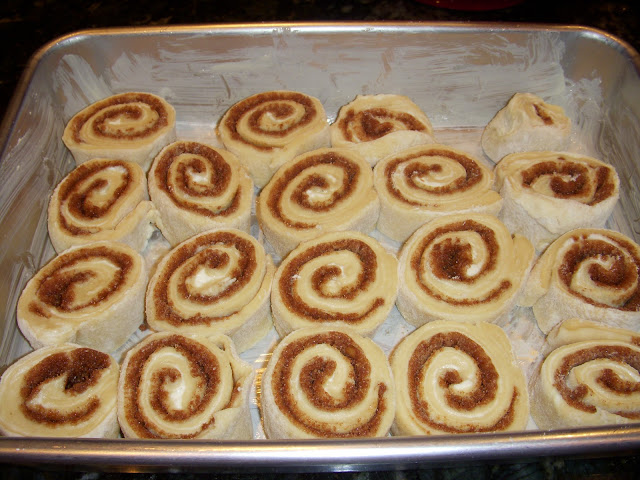 Let rolls rise another 2 hours.  Look at them!  They almost puffed up over the pan! 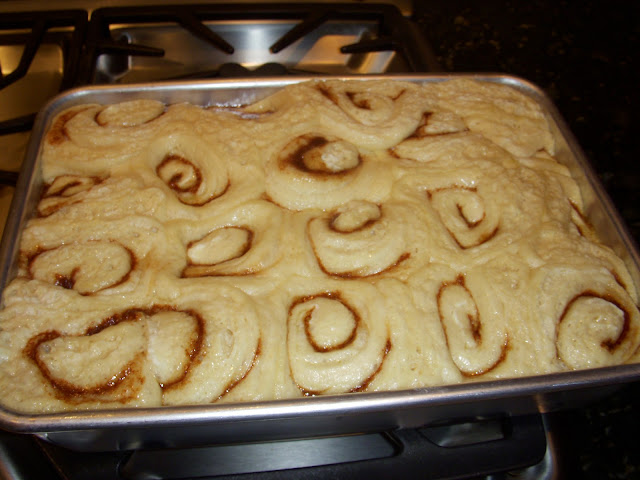 Bake in a 375 degree oven for 30 minutes.  They should be golden brown, and a toothpick inserted in the center should come out clean. 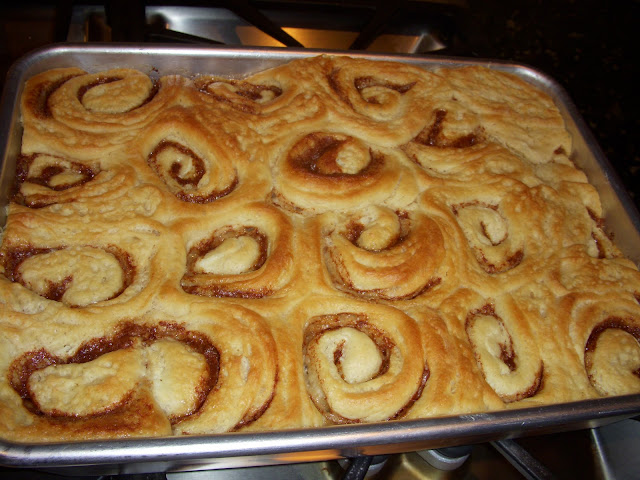 Make icing, and drizzle over the top of the rolls. 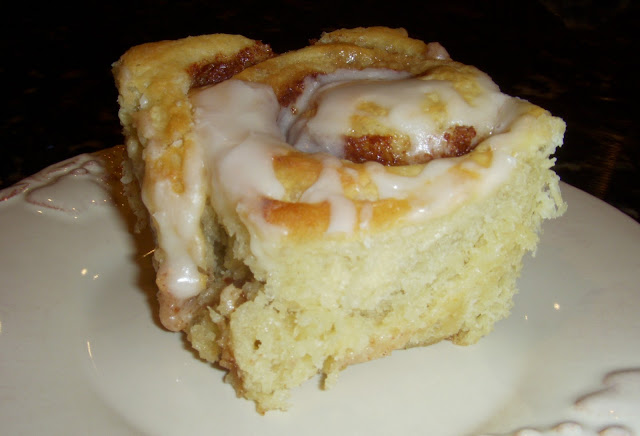 This is what was left after 10 minutes between the four of us (mom, dad, sis, and me!) 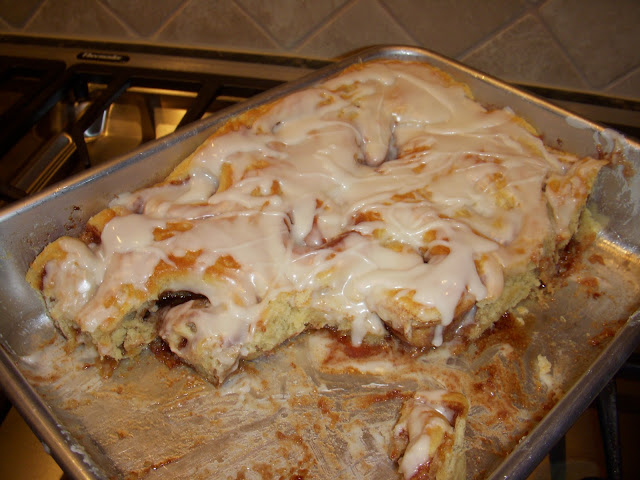 Mmmm…look at that gooey, cinnamon and icing center! 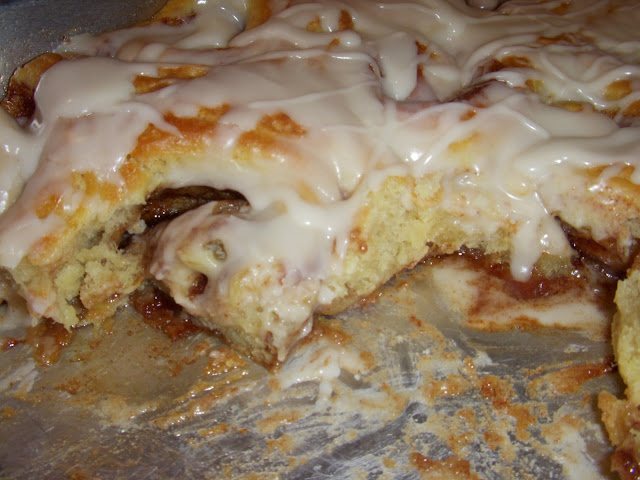 (We mixed together 2 cups powdered sugar, 2 tbsp. milk, 1 tsp. vanilla, and a dash of salt for our icing).

Directions
1. Make the dough:  In a bowl of a stand mixer fitted with a hook, combine yeast, 1/2 tsp. sugar, and 1/4 cup water heated to 115 degrees F.  Stir to combine and let sit until foamy, about 10 minutes.  Add remaining sugar, milk, light brown sugar, vanilla, egg, and egg yolk.  Beat on low speed until thoroughly combined, 1 minute.  Turn mixer off and add the flour and salt.  Mix on medium speed until the dough just comes together.  Turn mixer speed to high and knead dough for 4 minutes.  Add the butter and continue kneading until dough is smooth and pulls away from the side of the bowl, about 6 minutes.  Remove bowl from the mixer, cover with plastic wrap, and set aside in a warm place.  Let the dough rise for 1 1/2-2 hours, until it has doubled in size.

3.  Punch the dough down and turn it out onto a heavily floured surface.  Gently knead the dough until it’s no longer sticky, adding more flour as necessary, about 1 minute.  Using a floured rolling pin, roll the dough into a 10 x 10 – inch square.  In a small bowl, beat the cream cheese with a rubber spatula until it’s smooth and spreadable.  Spread the cream cheese evenly over the dough square; then fold square into thirds as you would fold a letter to fit it into an envelope.  Take the open ends of the resulting rectangle and fold into thirds again, to make a smaller dough square.  Invert the dough so that the seam is face down, and using the rolling pin, gently roll into a 10 x 20 – inch rectangle.

4.  Turn the dough so that the short sides are parallel to you.  Brush the top of the dough with half of the melted butter.  Drizzle the reserved filling over the dough, leaving a 1-inch border at the edge farthest away from you.  Lightly press the filling into the dough.  Using your hands, lift up the bottom edge of the dough and roll it forward into a tight cylinder.  Place dough cylinder, seam side down, on a cutting board and, using a thin, sharp knife, trim off the ends; cut cylinder crosswise into 8 equal-size slices.  Nestle the slices, cut sides up and evenly spaced from one another, into a buttered 9 x 13 – inch light colored metal baking pan.  Cover the pan with plastic wrap and set aside in a warm place to let rise for 2 hours.  (Alternatively, the rolls may be refrigerated overnight.)

5.  Heat the oven to 375 degrees F.  Uncover the rolls.  (If refrigerated, let them sit at room temperature for 15 minutes.  Bake until golden brown and a toothpick inserted in the center of the rolls comes out clean, about 30 minutes.

6.  Make the icing:  While the rolls are baking, whisk together the sugar and buttermilk in a small bowl until smooth.

7.  Transfer the pan of cinnamon rolls to a cooling rack; brush with remaining melted butter.  Let cool for 5 minutes.  Dip the tines (prongs) of a fork into the icing and drizzle over the rolls.  Serve immediately.